It is not to Hong Kong but to Canton, now called Guangzhou, we must look for the beginnings of what became the Hong Kong St Andrew’s Society. In the early 19th Century, Canton was the centre of China’s foreign trade and was the base for the foreign trading community. During the winter months, foreign traders, many of them British, lived in their “Factories” which were warehouses on the ground floor with living accommodation above. They were confined to a very small area in Canton to keep them separate from the local population. They appear, however, to have lived well and had a reputation for lavish hospitality.

There were at least several St Andrew’s Dinners held during the 1830’s in Canton and it was quite probably an annual occasion. On 30 November 1832, a lively dinner was held on board the Jamesina, one of Jardine Matheson & Co’s ships, when trading off Chin Chew Bay, Fukien. James Innes, a supercargo on board, wrote on 1 December that they had celebrated St Andrew’s Day in good style and that all the officers on board had been Scots. 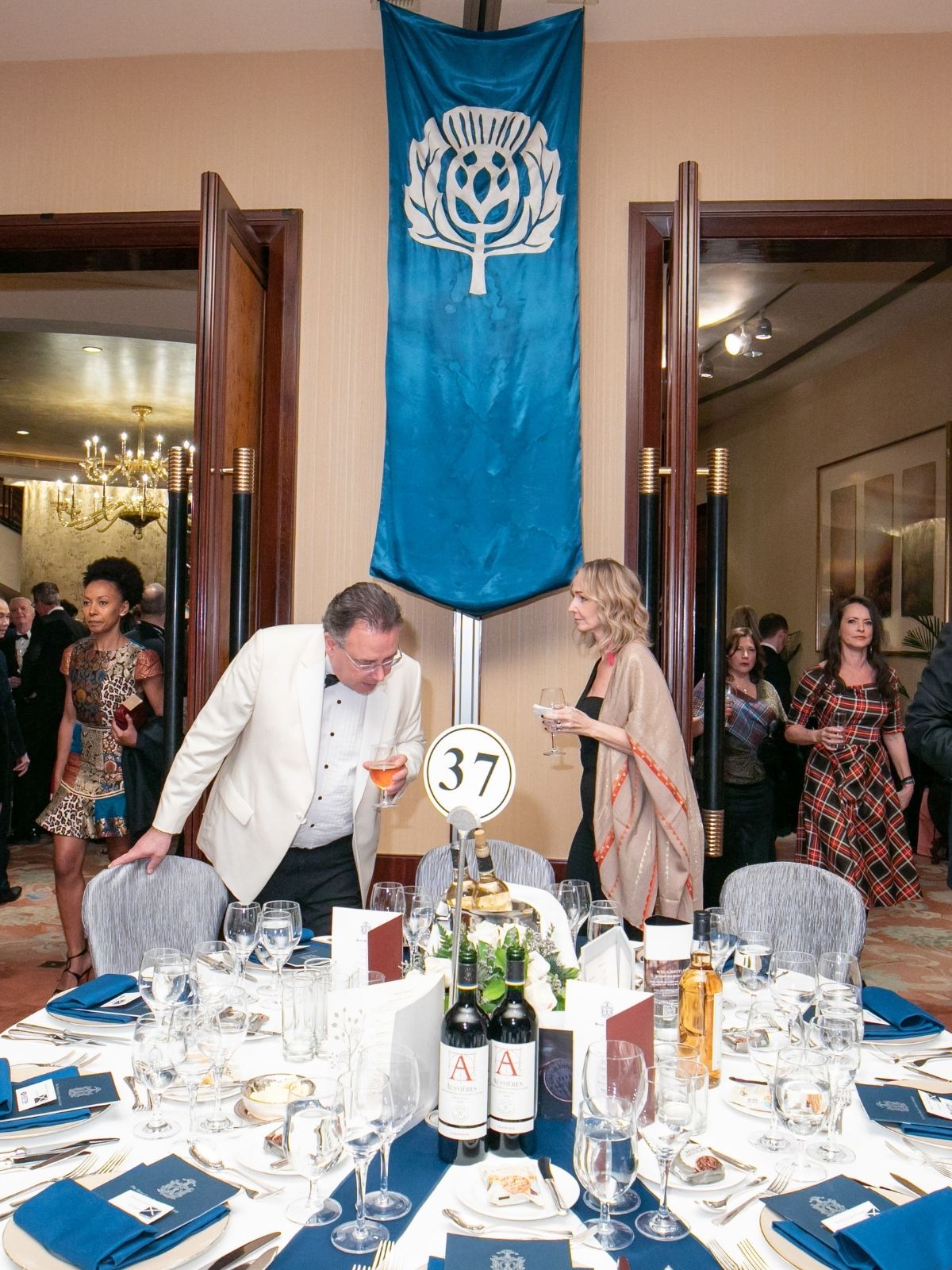 Much larger dinners were held regularly in different locations in the factory area of Canton. In 1834, it was held at No 1 Danish Hong, in 1835 at Mr Jardine’s accommodation, probably at Jardine Matheson & Co’s offices at No 4, the Creek and, in 1840, it was hosted by Mr Matheson. They were usually attended by between 60 and 80 Scots and guests of other nationalities, including, on at least two occasions a Chinese gentlemen and two Parsee gentlemen. 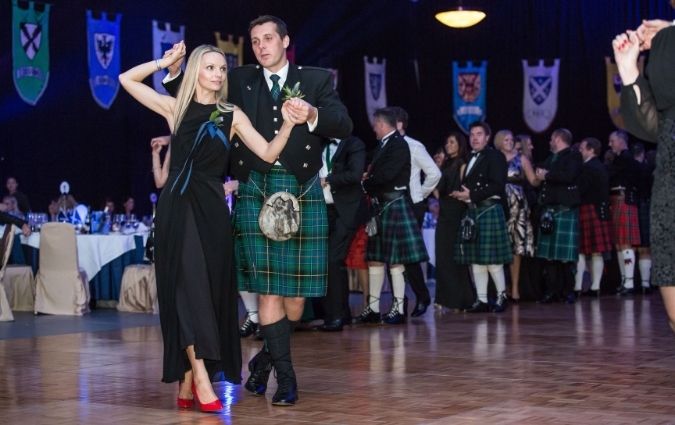 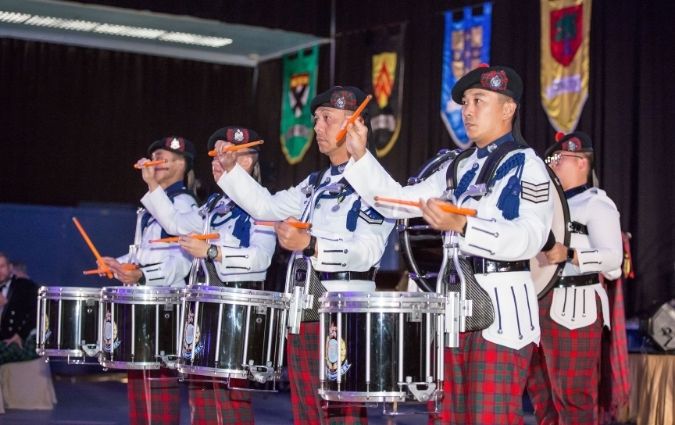 The format seemed to follow a well established pattern. The evening would start at about 7 o’clock with a dinner at which haggis was served. The dinner, however, was never something upon which any account of the St Andrew’s Dinners dwelled! The main feature was the many toasts which were drunk throughout the course of the evening. These were accompanied by a band from one of the ships: in 1835 it was from the Lord Lowther, a former East India Company ship. The toasts would start with toasts to ‘The Land o’ Cakes’ or to ‘The King’ or, after 1837, to ‘The Queen and Prince Albert’. Others could include toasts to the Army and Navy, Her Majesty’s Plenipotentiaries in China, the Kirk in Scotland, even ‘England, the Land of Beef’ and ‘Ireland, the Land of Potatoes’. Another feature of these evenings was that they all ended at a very late hour, if not the dawn of the following day!

Jardine Matheson & Co has been present in Hong Kong since the British flag was raised on 26 January 1841. They set up their headquarters in Hong Kong and established their offices and accommodation at East Point, long since known as Causeway Bay. Their accommodation was well appointed and they also kept a chef from London. This would have been a most appropriate setting for the St Andrew’s Dinners held at East Point from the 1850’s. They were, in later years, remembered with much fondness.

The venue of St Andrew’s Dinners later moved to the Hong Kong Club in Central, at that time located at the corner of Queen’s Road and Wyndham Street. This continued to be the venue for the St Andrew’s Dinner for the next five years. The first full report is of the one held in 1866. Haggis and toddy were served and it went on until 1.30 in the morning. The Chairman proposed the first toast to the ‘Land o’ Cakes’. Toasts were proposed to ‘The Scottish Worthies’ and to ‘The Sassenach’ being interpreted to include all guests present that evening, to “The Scottish Lassies” and, a toast was proposed to the Chairman which was “drunk with all the honours and uproarious cheering.” Much singing of Scots, English, Irish and American songs followed and it was not until two that the evening finally ended.

The Jardine Matheson & Co connection was perpetuated at the 1867 St Andrew’s Dinner which was chaired by the Hon William Keswick, Jardine’s Taipan. Some 75 to 100 gentlemen attended which included many more guests than in previous years. They all sat down to a dinner which had on the menu such Scottish dishes as Haggis and Cock a Leekie, all washed down with a hot whisky punch. Many speeches were made and toasts drunk, to the ‘Land o’ Cakes’, “‘The Memory of Scott and Burns”, “The Memory of Bruce and Wallace”, “The Hielan’ Clans”, ‘The Lowland Lads”, and ”The Lassies” and a toast was given on behalf of ‘The Guests’. Finally, a toast to the health of the Chairman was proposed “which was received with renewed cheering and drank in a most enthusiastic manner”.[ Hong Kong Daily Press, 2 December 1867.] The 1868 dinner, again chaired by the Hon William Keswick, proceeded in like manner.

Only a private dinner was held in the Hongkong Hotel in 1869. It had been hoped it could have been held in the newly opened City Hall. A St Andrew’s Dinner was held there in 1871 which again was chaired by the Hon William Keswick who proposed the toast to “the Pious and immortal Memory of St Andrew”. This was drunk “in solemn silence”, whereas the toast to the “Land o’ Cakes” proposed by the Vice-Chairman which was “drunk to with enthusiasm.” This dinner was, perhaps, a slightly more staid affair. The famous missionary, the Rev Legge, who a few days previously had given a talk on John Knox at Union Church, gave a very erudite speech on “the literary worthies of Scotland” which was considered “the speech of the evening”. Only a few songs were sung and the dinner finished before midnight.

The last St Andrew’s Dinner of which there is a record took place on 30 November 1873. It took place in the HongKong Hotel and seemed to have been a more private affair. It was reportedly attended by most Scots resident in Hong Kong. The well known portrait of St Andrew was on display and speeches on Scottish literature and the universities were delivered. On the whole, it was a successful evening.

Changes were afoot, however, with the advent of the annual St Andrew’s Ball. 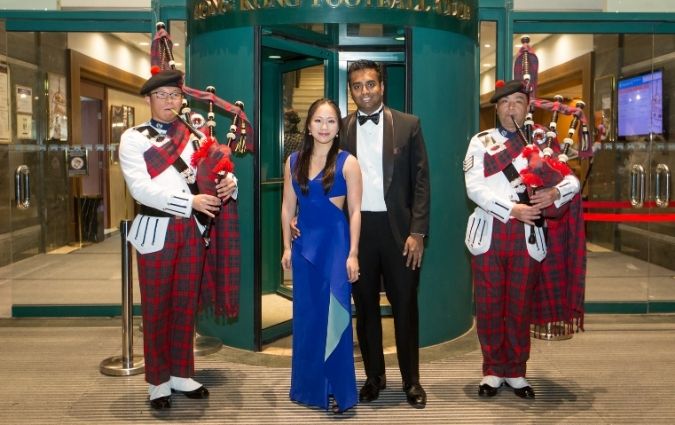 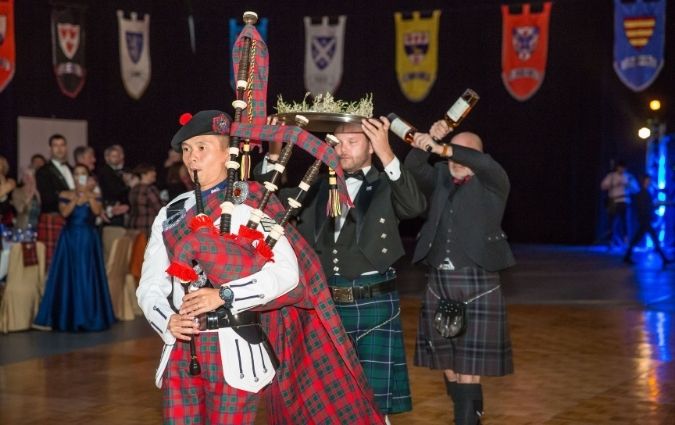